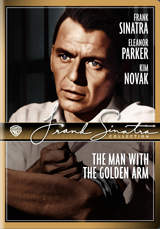 The Man With The Golden Arm, starring Frank Sinatra, is one of the latest additions to Warner Home Video’s DVD line-up, scheduled to appear in front of audiences in late May.

Frank Sinatra gives a searing, Oscar-nominated performance in this movie as an aspiring drummer struggling to break free of his drug habit. The film is a true Hollywood landmark, directed by Otto Preminger.

Featuring an anamorphic widescreen transfer of the film, the DVD will also include the movie’s original trailer as an extra.