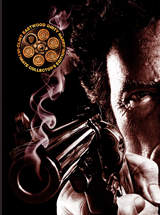 It’s a dream come true for Dirty Harry fans with all of Callahan’s stories getting special edition DVD and Blu-ray releases. Dirty Harry: Special Edition, Magnum Force Deluxe Edition, The Enforcer Deluces Edition, Sudden Impact Deluxe Edition and The Dead Pool Deluxe Edition will all be arriving along with a nice boxe set.

Set in San Francisco in 1971, Dirty Harry is the gritty and suspenseful film that follows the story of Inspector Harry Callahan (Clint Eastwood), who earns the moniker ‘Dirty Harry’ for his reputation of handling the dirtiest homicidal cases. The City by the Bay faces the terror of a serial killer known as Scorpio (Andrew Robinson), who viciously snipes at innocent victims and demands ransom through notes left at the scene of the crime. Callahan is assigned to the case along with his newest partner, Inspector Chico Gonzalez (Reni Santoni) to track down Scorpio and stop him. Using humiliation along with cat and mouse type games against Callahan, Scorpio is put to the test by the cop with the very dirty attitude.

The discs contain a new commentary by Richard Schickel, the featurettes The Long Shadow of Dirty Harry and Dirty Harry: The Original, interviews, the TV special Clind Eastwood: the Man from Malpaso and trailers.

Magnum Force, which was released in 1973 as a sequel to Dirty Harry has Eastwood reprise his famous role as Inspector Callahan, which has him face crooked cops and a traitorous boss as well as suffering re-assignment from homicide to stakeout duty after his handling of the Scorpio case. Callahan and his new partner, Earlington “Early” Smith (Felton Perry), are called off a case in which a man acquitted of murder is found dead along with his chauffer, lawyer and bodyguard. Soon after, a mafia figure, and several of his family and friends are also gunned down. Then, a well-known pimp is murdered too. Callahan and ‘Early’ are soon re-assigned to investigate the homicides.

Magnum Force comes with an audio commentary with John Milius, the featurettes A Moral Right: The Politics of Dirty Harry and The Hero Cop: Yesterday and Today and trailers.

Released in 1976, The Enforcer marks the third installment in the Dirty Harry franchise. The film’s plot has Inspector Callahan (Eastwood) paired with a new partner, policewoman, Inspector Kate Moore (Tyne Daly), as they hunt for a group of terrorists that are blackmailing the city of San Francisco for two million dollars. Callahan, none-too-pleased by being teamed up with a woman, must put his job first and the two attempt to shut down the terrorists. Moore, however, proves herself after she and Callahan pursue the terrorists to their hideout in the prison of Alcatraz.

A new commentary with James Fargo, and the featurettes The Business End: Violence in Cinema and Harry Callahan/Clint Eastwood: Something Special in Films accompany the trailers in this release.

Sudden Impact is Eastwood’s fourth Dirty Harry film. Released in 1983, follows Inspector Callahan (Eastwood) as he’s shipped to San Paulo, a small town down the coast to investigate a murder. The killer is Jennifer Spencer (Sondra Locke) who out for revenge is murdering all the rapists that gang-raped her and her little sister 10 years ago. During his investigations, Callahan becomes entangled in Jennifer’s own troubles – all the while never suspecting that she’s the killer.

Schickel provides another commentaryB along with the single featurette The Evolution of Clint Eastwood and trailers on this release.

The final film in the collection is The Dead Pool, which was originally released in 1988. The Dead Pool finds Inspector Callahan (Eastwood) investigating an unusual betting game played by a film director and his crew, which has the players create a list of 10 celebrities they think will die. The winner is the one with the highest number of dead celebrities. Soon, however, people on the list begin to die under mysterious circumstances. Callahan is assigned to the case and discovers his name has made the list.

The final Harry film contains an audio commentary with David Valdes and Jack N. Green, the featurette The Craft of Dirty Harry and the trailer gallery.

All of these titles will be available seperately or together on DVD, but Blu-ray fans will have to pick up the titles as a box set (except for Dirty Harry which will be available seperately). The box set will carry a number of additional extras including the documentary Clint Eastwood: Out of the Shadows, a 40 page hardcover book, lobby card reproductions and a map of San Fransisco.

All of the releases are arriving on June 3rd.