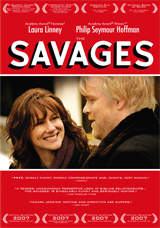 20th Century Fox Home Entertainment has unveiled plans to release The Savages on DVD in May.

Nominated for two Academy Awards including Best Actress for Laura Linney and Best Original Screenplay for writer/director Tamara Jenkins, “The Savages” centers on two siblings who are reluctantly forced to look back at their difficult family history. Having wriggled their way beneath their father’s domineering thumb, they are firmly cocooned in their own complicated lives – Wendy (Linney) a struggling playwright; Jon (Philip Seymour Hoffman) a neurotic college professor. When their father (Philip Bosco) begins to be consumed by dementia, they are forced to live together under one roof for the first time since childhood. Faced with complete upheaval and battling over how to handle their father’s final days, they are confronted with what adulthood, family and most surprisingly, each other are really about.

Presented in anamorphic widescreen the DVD will feature a Dolby Digital 5.1 audio track and come with a number of bonus materials, such as the Featurette “About the Savage”. Also included are Director’s Snapshots and two Extended Scenes, namely “The Sun City West Rhythm Tappers” and “Two of a Kind.”