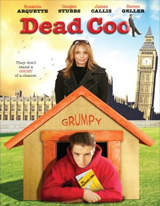 The film is the story of modern family relationships, as seen through the eyes of 15 year-old David (Steven Geller). Six years after his dad (James Callis) dies in a car crash, David’s mum (Imogen Stubbs) moves in with the new man (Anthony Calf) in her life. As the two families come together – complete with teenage step brothers and sisters, a crushingly acerbic granny (Liz Smith) and one feisty, American self-help guru ex-wife (Rosanna Arquette) – David has fantasies of his father’s ghost returning to disrupt the new step-family and test its survival.

The DVD will feature an anamorphic widescreen presentation of this indie-comedy with a 5.1 channel Dolby Digital audio track. As the only extra you will find the film’s Trailer on the disc.