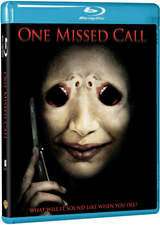 Warner Home Video might have your number as they send One Missed Call out to the world in April on DVD, HD-DVD and Blu-Ray Disc.

It happens to one. Then another. And another. College students discover eerie voicemail messages on their cell phones. Each call comes from the near future. Each call has the chilling voice of the student during his or her last moments alive. And each call comes true.

Terror is One Missed Call away in this got-your-number shocker based on the hit Japanese thriller “Chakushin ari.” Does the viral spree of calls have a single source? Is there something that links the victims? Psych student Beth Raymond (Shannyn Sossamon) and detective Jack Andrews (Ed Burns) scramble for answers. And they’re working fast. Because Beth just discovered an ominous message.

The DVD version will feature the original widescreen transfer of the movie as well as a fullframe presentation of the film on one disc. No extras will be available.

The HD-DVD version will be a HD-DVD/DVD combo featuring the high definition version of the film on one side and the DVD version on the other. Once again, no extras are included.

The Blu-Ray version will also offer up a high definition transfer of the movie and will also include no bonus materials.