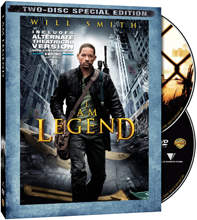 Warner Home Video has slated the Will Smith science fiction flick I Am Legend for release in March on , HD-DVD and Blu-Ray.br/>
Robert Neville is a brilliant scientist, but even he could not contain the terrible virus that was unstoppable, incurable, and man-made. Somehow immune, Neville is now the last human survivor in what is left of New York City and maybe the world. For three years, Neville has faithfully sent out daily radio messages, desperate to find any other survivors who might be out there. But he is not alone. Mutant victims of the plague — The Infected — lurk in the shadows… watching Neville’s every move… waiting for him to make a fatal mistake. Perhaps mankind’s last, best hope, Neville is driven by only one remaining mission: to find a way to reverse the effects of the virus using his own immune blood. But he knows he is outnumbered… and quickly running out of time.

The DVD version will be available separately as fullframe and widescreen versions with Dolby Digital audio, as well as a widescreen-only 2-disc Special Edition. The single-disc release will contain Four Animated Comic Books. The Special Edition will contain the same disc with the same features, plus a second disc containing an Alternate Cut of the film with a more controversial ending – or so they say.

The HD-DVD version will be a HD-DVD/DVD combo disc containing both versions of the movie in 1080p high definition with Dolby Digital Plus audio tracks on one side, as well as a standard def transfer of the Comic Books, plus the DVD version of the film on the flip side.

The Blu-Ray version will also contain both versions of the movie in 1080p high definition with Dolby Digital Plus audio tracks and a standard def transfer of the Comic Books.