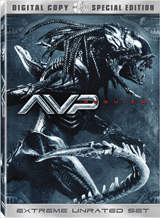 20th Century Fox Home Entertainment is kicking things into gear for the release of Aliens Vs. Predator: Requiem, the latest installment in the scifi horror franchise on DVD and Blu-Ray Disc.

Once again the iconic creatures from both franchises collide and wage their most brutal battle ever — in our own backyard. Picking up immediately after the events of the 2004 worldwide blockbuster Alien vs. Predator, the Predator gives birth to the crossbreed ‘PredAlien’ shortly before the ship crashes into a small Colorado town. Caught in between the invasion of the Aliens and a new ruthless and methodical Predator, a group of townspeople must join forces to stop the infestation before the military obliterates the town to contain the outbreak.

The DVD version of the blockbuster film will come as two single disc releases, one featuring the movie’s theatrical cut, the other featuring the film’s unrated cut, as well as a 2-disc Special Edition offering the Unrated Cut of the movie with more than ten minutes of never-before-seen gruesome footage added back into the movie.

The 2-disc Special Edition will feature the commentary tracks also, of course, as well as an additional plethora of extras, such as 5 Featurettes entitled “Prepare for War: The Making of AVP-R,” “”Fight to the Finish: The Making of AVP-R,” “AVP-R: The Nightmare Returns – Creating the Aliens,” “Crossbreed: The PredAlien” and “Building the Predator Homeworld.” In addition the release will contain a number of Design Galleries for the Predator, the Alien and the PredAlien. Also look for a series of On Set Featurettes on the disc, taking a look at “The Rooftop,” “The Sewer,” “The Hive” and the “Cast & Crew.” The release will be rounded out by the movie’s Trailers, including a Restricted Audience trailer, and Fox’s Digital Copy Feature that allows you to make a copy of the film for playback on your computer or portable devices.

The Blu-Ray Disc version features both the theatrical rated and unrated versions of the film seamlessly branched in 1080p widescreen format, encoded using the AVC algorithm. It will contain a DTS 51. HD Master audio track as well as Dolby Digital Plus tracks. All the extras from the Special Edition DVD will be included on this BD-50 release, as well as Picture-in-picture Reference Guide called “Weyland-Yutani Archives” which allows viewers access into the movie-based corporation’s top-secret computer mainframe to discover information on all things Alien and Predator.