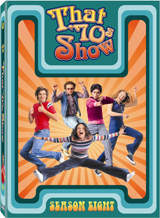 Following the departure of both Eric and Kelso, the fun-loving friends of Point Place, Wisconsin are forced to recognize times are a-changing. Hyde returns from Chicago a married man while Jackie and Fez explore their relationship and move in together. Donna starts a new relationship and Jackie lands a job at a television station as an assistant to a psycho boss. The whole gang manages to reunite for a final bittersweet farewell to the decade that has brought such hysterical hi-jinks and overall mayhem.

The DVD set will feature all of the season 8 episodes on 4 discs. As extras, look for a few bonus features, such as That ‘70s Show Through The Years: A Retrospective, A ‘70s Show Flashback: Tommy Chong and Josh Meyers Featurettes as well as a Set Tour with director David Trainer. Also included is the Featurette Season 8 in 8 Minutes and a Commentary Track on select episodes by director David Trainer. The set will be rounded out by a selection of TV Promos.