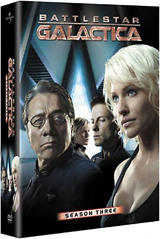 On March 25 the struggle for mankind’s survival continues on DVD when Universal Home Entertainment’s Battlestar Galactica: Season 3 arrives in stores as a 6-disc DVD set.

The Colonies’ survivors have found their hopes of eluding their Cylon pursuers dashed by an invasion and occupation of their new home. As the fate of all human life hangs in the balance, friends become enemies, enemies become unexpected allies, and decisions are made that will haunt some people for the rest of their lives..

This Season 3 DVD set of the acclaimed SciFi Channel TV series will contain all 20 episodes of the season in anamorphic widescreen with 5.1 channel Dolby Digital sound. The release will also be packed with over 15 hours worth of bonus materials to offer something for everyone.

One of the key supplements are a number of Deleted Scenes from a variety of episodes, offering additional insight into the characters and the plot itself. There will also be a large number of Commentaries and Podcasts on the release, as well as Webisodes and Video Blogs making sure the release covers every aspect of the production.

“Battlestar Galactica: Season 3” continues to fight on March 25 and you can join the battle for $59.98.