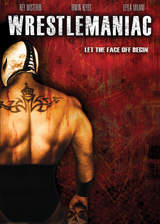 Anchor Bay Entertainment has announced a new movie to be released on DVD in March, a horror movie set in the world of wrestling – a story they call Wrestlemaniac. Starring wrestling diva Leyla Milani, horror film favorite Irwin Keyes (House of 1000 Corpses, Horror High) and legendary “luchadore” Rey Misterio, “Wrestlemaniac” has already developed a broad cult following and now “El Mascarado” is coming for you!

Also included a Making Of Featurette called “Wrestling The Maniac” and the movie’s Trailer.