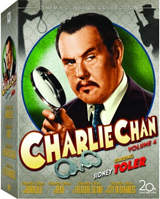 20th Century Fox Home Entertainment has announced the release of The Charlie Chan Collection – Volume Four on DVD for February.

Traveling across the globe, Charlie Chan tackles each new dangerous mystery with a delightful combination of steely fortitude and lighthearted fortune cookie wisdom. The blend of enlightened wit and jovial counsel in the face of treacherous situations has made Charlie Chan a cinematic icon over multiple generations to become one of film’s most well-known crime-solvers. The first four of Toler’s classic Charlie Chan escapades make their DVD debut in “The Charlie Chan Collection – Volume Four” – including Charlie Chan In Honolulu, Charlie Chan In Reno, Charlie Chan At Treasure Island and Charlie Chan In The City Of Darkness.
In addition to these movies the DVD will also sport a series of new bonus materials. On “Charlie Chan in Honolulu” for example you will find a series of Featurettes such as “Reinventing Chan,” “Sidney Toler: The Man Who Became Chan,” and “Charlie Chan’s Courage: A Re-creation of a Lost Chan Film.”

On “Charlie Chan in Reno” you will see the Featurettes “Welcome to Reno: America’s Divorce Resort,” “Reno Memories,” “Chan’s Killer Actress: Kay Linaker” as well as the movie’s Theatrical Trailer.

The film “Charlie Chan in the City of Darkness” will be accompanied by the Featurettes “The Making of Charlie Chan in City in Darkness” and “Writing Chan: Robert Ellis & Helen Logan,” as well as the movie’s original Theatrical Trailer.