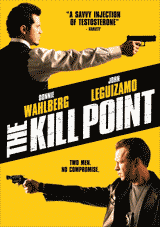 Lionsgate Home Entertanment is preparing a DVD release of The Kill Point for March.

From Spike TV comes the acclaimed original series, The Kill Point. Emmy Award-winning actor John Lequizamo is “Mr. Wolf, ” an Iraq war veteran who leads his ex-platoon on a daring bank heist. But when the robbery goes tragically wrong, the onetime soldier has no choice but to take hostages. Going head-to-head with Mr. Wolf is “Horst Cali” (Donnie Wahlberg), a no-nonsense hostage negotiator who refuses to back down. What follows is a thrilling match of wits and guts between two men who both have something to prove – and everything to lose.

The DVD will feature an anamorphic widescreen version of the movie with a Dolby Digital 5.1 audio track. No bonus materials have been announced.