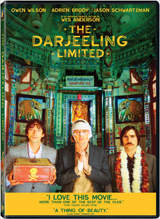 Three American brothers who have not spoken to one another in a year set off on a train voyage across India with a plan to find themselves and bond with each other – to become brothers again like they used to be. Their “spiritual quest” however, veers rapidly off-course and they eventually find themselves stranded alone in the middle of the desert with eleven suitcases, a printer and a laminating machine. At this moment, a new, unplanned journey suddenly begins.

The DVD will feature the movie in its original 2.35:1 widescreen aspect ratio as well as a pan&scan version, supplemented by Dolby Digital 5.1 audio tracks. As extras the disc will contain the Featurette “Hotel Chevalier” as well as a number of other Featurettes.

“The Darjeeling Limited” is coming to DVD on February 26 with a $29.98 suggested retail price.