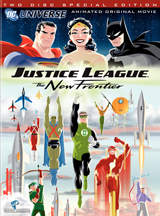 Warner is releasing a barebones standard DVD and a featured-laden 2-disc DVD, HD DVD, and Blu-Ray Disc. The features include a documentary about super villain pathology, three bonus episodes of the television series selected by animation legend Bruce Timm.

Each edition will be available on February 26. The standard DVD is set to retail for $19.98, the 2-disc Special Edition DVD will cost $24.98, and the price points of the Blu-ray and HD DVD versions have yet to be announced.