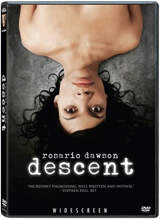 City Lights Home Entertainment is preparing one of the most controversial films of the year, Descent to DVD in February.

Maya (Rosario Dawson) is like many other college coeds, booksmart yet shy, curious about sex, yet scared to let herself go. One night she meets Jared (played by Chad Faust). When their courtship turns from romantic to horrific in a single violent act, Maya’s world is ripped inside-out. Shutting out everyone in her life, Maya loses herself to a dark throbbing underworld of experimentation. Lured by club DJ Adrian (Marcus Patrick), she awakens to a cold and vicious new strength. But will Maya’s downward spiral consume and destroy her – or will she be saved by its power?

The DVD will feature the original NC-17 theatrical version of the movie and will be in stores on February 5 for $26.98.