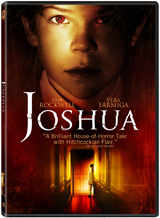 Evil has a new name… again. 20th Century Fox Home Entertainment has announced the release of Joshua on DVD this January.

The film stars Sam Rockwell and Vera Farmiga in a suspenseful thriller that follows an upscale American family faced with horror. The Cairn’s seem to have the perfect life until their nine-year-old prodigy Joshua begins to eerily affect the household.