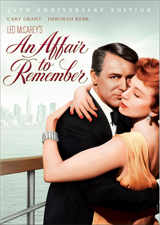 20th Century Fox Home Entertainment is celebrating the 50th Anniversary of An Affair To Remember and brings the film back to DVD as a 2-disc Special Edition.

In this poignant and humorous love story, Cary Grant and Deborah Kerr meet on an ocean liner and fall deeply in love. Though each is engaged to someone else, they agree to meet six months later at the Empire State Building if they still feel the same way about each other. But a tragic accident prevents their rendezvous and the lovers’ future taken an emotional and uncertain turn.

The release will be rounded out by a series of Trailers and a Poster Gallery and a Still Gallery.