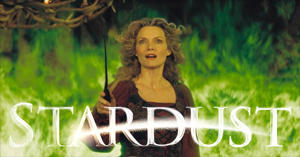 One of the summer’s surprise fantasy hits is coming to DVD and HD-DVD just before Christmas as Paramount Home Entertainment is putting the final touches to Stardust.

Escape into the enchanted world of chivalry and romance in Stardust, an epic tale starring Claire Danes with Michelle Pfeiffer and Robert De Niro. In hopes of wooing a beautiful girl (Sienna Miller), Tristan (Charlie Cox) promises to bring her a falling star. But he’s in for the adventure of his life when he discovers the star is actually a celestial beauty named Yvaine (Danes) When an old witch Lamia (Pfeiffer) attempts to steal Yvaine’s youth, Tristan must protect her at all costs, in this magical family adventure that will make you fall in love over and over again.

The DVD version will feature an anamorphic widescreen presentation of the movie with Dolby Digital 5.1 audio tracks in English, French and Spanish. As extras the disc will contain Five Deleted Scenes – “Candlight Small Talk,” “Lift the Stone,” “Carriage Game,” “Goat Man,” and “The Next Ruler of Stormhold.” Also included on the disc is the Making-Of Featurette “Good Omens”, a Blooper Reel and the movie’s Trailer.

The HD-DVD version will feature an anamorphic widescreen presentation in 1080p with Dolby Digital 5.1 Plus audio tracks in English, French and Spanish. The disc will contain the same extras as the DVD version but the Making-Of Featurette “Good Omens” and the Trailer will be presented in high definition.