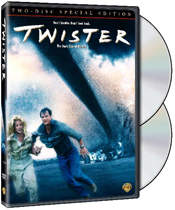 Warner Home Video has just given us a glimpse at their upcoming line-up, including a brand new Twister Special Edition scheduled for release on DVD, HD-DVD and Blu-Ray Disc in January.

A house rips apart piece by piece. A bellowing cow spins through the air. Tractors fall like rain. A 15,000-pound gasoline tanker becomes and airborne bomb. A mile-wide, 300 miles-per-hour force of total destruction is coming at you: Twister is hitting home. In this adventure swirling with cliffhanging excitement and awesome special effects, Helen Hunt and Bill Paxton play scientists pursuing the most destructive weatherfront to sweep through mid-America’s Tornado Alley in 50 years. By launching electronic sensors into the funnel, the storm chasers hope to obtain enough data to create and improved warning system. But to do so, they must intercept the twisters’ deadly path. The chase is on!

Coming as a 2-Disc Special Edition to DVD the film will offer up a new transfer and new features, though exact details have yet to be announced. A HD-DVD and Blu-Ray version of the release are also in the making for a simultaneous release on January 8.