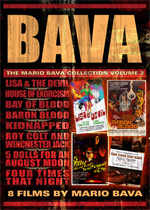 The Mario Bava Collection: Volume 2 will contain 8 films of the Italian master, including brand new transfers of Baron Blood, Kidnapped, Lisa and the Devil (was well as the alternate version House of Exorcism), Roy Colt and Winchester Jack, Four Times That Night, Bay of Blood and 5 Dolls for an August Moon. All films will be presented in their original international versions and will be complemented by all-new bonus features, which include Commentary Tracks by film historian Tim Lucas on most of the films, Featurettes and Trailers.