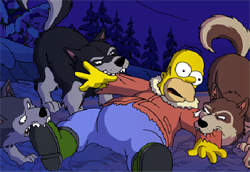 “The Simpsons” are nothing less than a cultural phenomenon – a hodge podge of pop references and satire, the television show is one of the longest running series in TV history.

Also included are Six Deleted Scenes, including an Alternate Ending. Further you will find Clips and Featurettes on the disc, such as “Homer’s Monologue On The Tonight Show,” “The Simpsons Judge American Idol,” “Homer Introduces American Idol,” “Let’s All Go To The Lobby,” and Alternate Character Designs by the directors and Matt Groening.