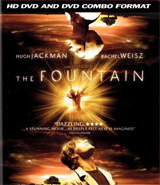 Warner Home Video has just unveiled their plans to release The Fountain on DVD, HD-DVD and Blu-Ray in May.

Yesterday, today, tomorrow. Past, present, future. Through time and space, one man embarks on a bold 1000-year odyssey to defeat humankind’s most indomitable foe: Death. Hugh Jackman plays that man, devoted to one woman (Rachel Weisz) and determined to protect her from forces that threaten her existence. His quest leads him to a Tree of Life… and to an adventure into eternity. Darren Aronofsky (Pi, Requiem for a Dream) directs, continuing his string of imaginative, involving filmmaking with a tale alive with ideas and filled with astonishing vistas.

The film will be sold separately as a fullframe and a widescreen DVD version, featuring an anamorphic widescreen transfer of the film with 5.1 channel Dolby Digital audio in English and French. As extras the disc will contain the Multi-Part Featurette “Inside The Fountain: Death and Rebirth” covering the the movie’s various periods and settings.