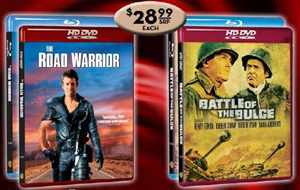 Warner Home Video has just announced plans to release The Road Warrior and Battle Of The Bulge in high definition this May, offering both titles up on HD-DVD and Blu-Ray Disc simultaneously.

“The Road Warrior” is set just after World War III has ended and the world’s remaining inhabitants are on a desperate, devastating, struggle to survive. Gasoline is in short supply and those remaining turn on one another for the crude oil. In his second appearance as the legendary Mad Max, Mel Gibson has to fight the odds and try to survive.

Five months after D-Day, most American soldiers think the German army is broken. The Germans think otherwise. In an attempt to buy time to fill the skies with their invincible new jets, they launch one fast, furious offensive: the “Battle of the Bulge.”

Both titles will contain the Featurettes found on the previous DVD releases but as an Exclusive High Definition Extra these releases will also come with Brand New Commentary Tracks!