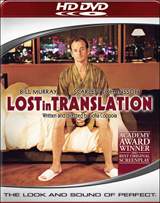 Coming from Universal Home Entertainment in May is Sophia Coppola’s award-winning film Lost In Translation.

Bob Harris (Bill Murray) and Charlotte (Scarlett Johansson) are two Americans in Tokyo. Bob is a movie star in town to shoot a whiskey commercial, while Charlotte is a young woman tagging along with her workaholic photographer husband (Giovanni Ribisi). Unable to sleep, Bob and Charlotte cross paths one night in the luxury hotel bar. This chance meeting soon becomes a surprising friendship. Charlotte and Bob venture through Tokyo, having often hilarious encounters with its citizens, and ultimately discover a new belief in life’s possibilities.

Featuring a 1080p widescreen transfer with Dolby Digital Plus audio tracks in English and French, the HD-DVD version of this film will also contain the features found on the previous DVD release. Look for a selection of Deleted Scenes, an On Location Featurette, a Conversation with Bill Murray and Sophia Coppola on the disc, as well as the Kevin Shields Music Video.

Mark May 29 in your calendars if you’re interested in this release and set aside $29.98 for it.