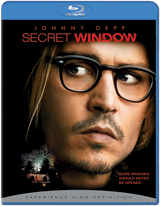 We just got information from Sony Pictures Home Entertainment that the studio plans to release a Blu-Ray version of the psychological thriller Secret Window in April.

Starring Johnny Depp , John Turturro, Maria Bello, Timothy Hutton and Charles S. Dutton this thriller will keep you on he edge of your seat. Following a bitter separation from his wife (Maria Bello), famed mystery writer Mort Rainey (Johnny Depp) is unexpectedly confronted at his remote lake house by a dangerous stranger named John Shooter (John Turturro). Claiming Rainey has plagiarized his short story, the psychotic Shooter demands justice. When Shooter’s demands turn to threats – and then murder – Rainey turns to a private detective (Timothy Dutton) for help. But when nothing stops the horror from spiraling out of control, Rainey soon discovers he can’t trust anyone or anything.

The Blu-Ray disc will feature a large number of audio tracks in a large variety of languages, including uncompressed 5.1 channel PCM tracks in German and French. Also included are a mind-numbing number of subtitle options in virtually every language imaginable – certainly too many to list here. Unfortunately Sony has not announced any bonus materials to go with this release.