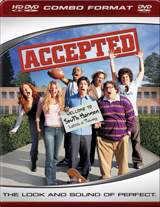 Higher education hits an all-time low when a loveable group of misfit slackers create their own college. Full of raucous partying and sophomoric laughs this campus comedy will come to DVD and HD-DVD.

Featuring the movie in its original 2.35:! widescreen aspect ratio, the HD-DVD version will offer up a 1080p transfer and complement it with a Dolby Digital TrueHD audio track, as well as an English Dolby Digital Plus track and 5.1 channel Dolby Digital tracks in English, French and Spanish.