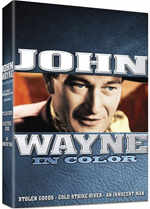 Each of the DVDs in the set will contain both a colorized version of the respective film as well as the original, black and white version. Both version have been entirely restored and remastered for the best possible viewing experience.