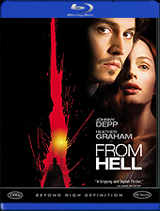 20th Century Fox Home Entertainment has just launched a website dedicated to their Blu-Ray releases, which can be found at http://www.foxbd.com/

The studio has scheduled another wave of Blu-Ray releases to hit retail stores on December 5, which will include high definition versions of Flight Of The Phoenix, Rising Sun, From Hell, Omen 666, Entrapment and The Sentinel,

No details have been announced at this point but we will keep you informed once complete information becomes available.