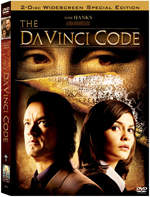 Sony Pictures Home Entertainment has just announced their plans to release The Da Vinci Code on DVD and UMD this winter. Interestingly no Blu-Ray version has been announced yet, but clearly this will only be temporary while Sony is working on the title.

In “The Da Vinci Code, ” noted symbologist Professor Robert Langdon (Tom Hanks) and police cryptologist Sophie Neveu (Audrey Tautou) go on a heart-racing quest to unearth the biggest cover-up in human history. Langdon is called to the Louvre Museum late one night where a curator has been murdered, leaving behind a mysterious trail of symbols and clues. With his own survival at stake, Langdon unveils a series of stunning secrets hidden in the art work of Leonardo Da Vinci, all leading to a covert society dedicated to guarding an ancient secret that has remained hidden for 2000 years. The pair set off on a frantic quest through Paris, London and Scotland, collecting clues as they desperately attempt to crack the code and reveal secrets that will shake the very foundations of mankind.

Coming as a 2-disc DVD set, the film will be available in separately sold widescreen and fullscreen versions, complete with Dolby Digital 5.1 sound tracks. A solid line-up of extras will accompany the special edition, such as the First Day on the Set with Ron Howard Featurette in which the director introduces the film and the excitement of beginning production at the Louvre in Paris. Also included is A Discussion With Dan Brown, a featurette on the author of the novel the film is based upon. It is followed up by the featurette A Portrait Of Langdon where we learn more about Robert Langdon and how Tom Hanks was chosen to play this iconic character. A similar featurette, Who Is Sophie Neveu? is included to cover the long and challenging journey to the casting of Audrey Tautou as Sophie Neveu, including the actress’ screen test with Tom Hanks. The look at the cast is rounded out by a third featurette, called Unusual Suspects, taking a look at the colorful, memorable and frightening characters of the film.

Then there is the Magical Places Featurette, a fascinating and surprising discussion about the cities and places that were chosen for the film locations, and Close- up on Mona Lisa, a featurette in which Ron Howard, his cast and colleagues share their experience working next to one of the most famous paintings in the world.

The Filmmaking Experience is a 2-part Featurette that is included on the release, in which Ron Howard discusses his collaboration with his Director of Photography, the challenges faced by production and the excitement of bringing the book to the screen. Includes a DVD-exclusive look at filming the last and revealing scene.

The Codes of “The Da Vinci Code” is another featurette on the DVD, discussing the hidden codes and symbols in the film. It isolates images from the film, giving the viewer clues over time as to what they mean, eventually giving a detailed description of what the imagery was intended to mean.

Then there is The Music of “The Da Vinci Code” a featurette on the film’s music and a number of DVD-ROM features.

“The Da Vinci Code will be unriddled on November 14 with a suggested retail price of $29.96. It comes in a special packaging that will feature hidden phrases from the film that can be viewed only with the use of a blacklight or a magnifying glass. One hidden message even leads to exclusive online content.