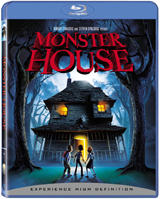 As announced previously, Sony Pictures Home Entertainment is bringing Monster House to DVD, Blu-Ray and UMD later this fall, and this morning we wanted to also give you a quick look at the cover of the release.

Containing Seven Featurettes on various subjects with names such as “Imaginary Heroes,” “Beginner’s Luck, “The Best of Friends,” “Lots of Dots,” “Black Box Theater,” “Making It Real,” and “Did You Hear That?” will be found on the release, as well as a Commentary Track by the filmmakers.

Also included on the release is a Multi-Angle Evolution segment, taking you through the scene of “Eliza vs. Nebbercracker” and uncovering how it made it from the idea all the to a final scene in the film.

You will also find a Photo Gallery called “The Art of Monster House” on the release.

“Monster House” is scheduled for October 24 already as previously announced.