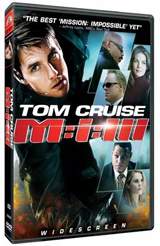 Paramount Home Entertainment has just officially announced that the latest installment in the Mission Impossible franchise, the action blockbuster M-I-III will finally arrive on home video on October 30.

Tom Cruise returns as Special Agent Ethan Hunt, who faces the mission of his life in “Mission: Impossible III.” Director J. J. Abrams brings his unique blend of action and drama to the billion-dollar franchise.

October 30 is, of course, a Monday, breaking the usual pattern of Tuesday releases and is a move that Paramount calls “Mission Monday” to increase awareness for the occasion. The release will be available as a single-disc DVD, a 2-disc Special Edition DVD, HD-DVD and Blu-Ray Disc.
Priced at $24.99 the DVD will contain a good number of explosive bonus features, starting out with a Commentary Track featuring Tom Cruise and director J.J. Abrams. Also included is a selection of Deleted Scenes and Four Documentaries and Featurettes. You will also find a Photo Gallery on the release as well as a Moviefon Unscipted segment, in which the Cruise and Abrams answer fan questions. Also included are the movie’s various Trailers and Paramount also hinted at a number of Easter Eggs to be found on the disc.

With a $19.99 sticker price, the single-disc DVD version will contain only the commentary track, the deleted scenes and a Making-Of featurette.

Priced at $29.99 the HD-DVD and Blu-Ray versions of the movie will feature glorious 1080p high definition transfers, of course, and feature Dolby Digital Plus audio tracks in English, French and Spanish. The HD-DVD version will also include an Enhanced Commentary Track with Tom Cruise and director J.J. Abrams, presented as an in-movie experience where the video commentary is visible while the movie is playing.

Hold on tight when Mission Monday rolls around on October 30, because this action-packed movie will storm video store shelves in a big way!