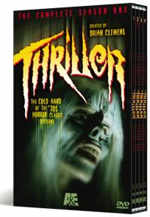 Following in the genre footsteps of such legendary anthologies as “The Twilight Zone” and “The Outer Limits, ” “Thriller, created by famed “Avengers”-auteur Brian Clemens, deftly combined superb writing and directing with a star-studded, ever-changing cast and became an instant primetime hit on both sides of the Pond in the early and mid-‘70s. A&E Home Entertainment is now releasing the entire Season 1 of the TV show as a 4-disc DVD set.

Featuring taut tales of all types, from bone-chilling horror to supernatural suspense, the program instilled fear in audiences on two continents for over three years. This 4-disc collection brings together all Season One stand-alone stories, each starring a talented new crop of the hottest actors of the day from both the U.K. and America, including Patrick Macnee, Bob Hoskins, Hayley Mills, Helen Mirren, Robert Powell, Donna Mills and more.

“Thriller: The Complete Season One” will be waiting in stores for you in September with a suggested retail price of $79.95.