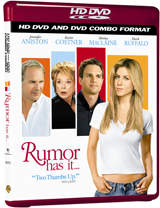 Exciting news just came in this afternoon from Warner Home Video. The studio just announced its second wave of HD-DVD titles, which will also include a hybrid release, featuring a disc in HD-DVD format on one side and a DVD version on the other.

Rob Reiner’s comedy Rumor Has It is the title in question coming on this hybrid disc, starring Jennifer Aniston as she portrays Sarah Huttinger, whose return home with her fiancé convinces her that the sedate, proper, country-club lifestyle of her family isn’t for her, and that maybe the Huttinger family isn’t even hers. Join Sarah as she uncovers secrets that suggest the Huttingers are neither sedate nor proper – and as Kevin Costner, Shirley MacLaine and Mark Ruffalo join the fun. The story is rumor. The laughs are real!

Offering the movie in this hybrid format is great news, of course, for all those who may not yet have HD-DVD hardware but plan to upgrade some time in the future. With releases like this there won’t be the need to replace your movie collection, as the disc can be directly carried over.

The HD-DVD/DVD version will carry a $39.99 suggested retail price when it comes to market on May 9

Also in the second wave of HD-DVD titles come Martin Scorcese’s GoodFellas, and the thrillers Swordfish and Training Days. No exact details have been released for those titles but we will keep you posted, of course. Expect “GoodFellas” and “Swordfish” in stores on May 2 and “Training Days” also on May 9, each with a $29.98 sticker price.