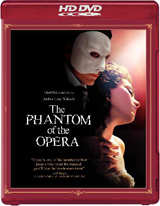 Scheduled to kick off the HD-DVD launch on Tuesday, April 18, Warner Home Video has prepared three titles from their library.

The Phantom Of The Opera is the magnificent musical drama based on Andrew Lloyd Webber’s celebrated musical phenomenon. It tells the story of a disfigured musical genius (Gerard Butler) who haunts the catacombs beneath the Paris Opera, waging a reign of terror over its occupants. When he falls fatally in love with the lovely Christine (Emmy Rossum), the Phantom devotes himself to creating a new star for the Opera, exerting a strange sense of control over the young soprano as he nurtures her extraordinary talents.

The extras that will be included on the release will be encoded in 480i, which is the standard DVD resolution, and not surprisingly you will find the exact same extras on this HD-DVD release as on the previous DVD version. As such, there will be the “Behind The Mask” Featurette on the story of “The Phantom Of The Opera” as well as The Making Of The Phantom Of The Opera in three separate featurettes. An Additional Scene is also included as well as a Singalong and the movie’s Trailer.

The second title in the line-up is Clint Eastwood’s Million Dollar Baby, which will also come as a 1080p encoded widescreen version, though only with a 5.1 channel Dolby Digital Plus audio track in English and a French 5.1 Dolby Digital track. No Dolby TrueHD track will be included.

“I don’t train girls ”, trainer Frankie Dunn growls. But something’s different about the spirited boxing hopeful who shows up daily at Dunn’s gym. All she wants is a fighting chance. Clint Eastwood plays Dunn and directs, produces and composes music for this acclaimed, multi-award-winning tale of heart, hope and family. Hilary Swank plays resilient Maggie, determined not to abandon her one dream. And Morgan Freeman is Scrap, gym caretaker and counterpoint to Dunn’s crustiness. Grab your dreams and come out swinging.

As extras the release will offer up the same bous materials found on the previous DVD release, all in standard definition 480i video format, such as James Lipton Takes On Three, an interview with Clint Eastwood, Hilary Swank and Morgan Freeman. Also included is Born To Fight a discussion with real-life boxer/actress Lucia Rijker. Producers Round 15 is a behind-the-scenes featurette that is also on the release, together with the movie’s Trailer.

The Last Samurai is the third title in the launch line-up, which will once again come as a 1080p encoded widescreen version, though only with a 5.1 channel Dolby Digital Plus audio track in English, a French 5.1 Dolby Digital and a 2.0 channel Spanish Dolby track. Once again, no Dolby TrueHD track will be included.

An epic action drama set in Japan during the 1870s, The Last Samurai tells the story of Capt. Nathan Algren (Tom Cruise), a respected American military officer hired by the Emperor of Japan to train the country’s first army in the art of modern warfare. As the Emperor attempts to eradicate the ancient Imperial Samurai warriors in preparation for more Westernized and trade-friendly government policies, Algren finds himself unexpectedly impressed and influenced by his encounters with the Samurai, which places him at the center of a struggle between two eras and two worlds, with only his own sense of honor to guide him.

Once again you will find the same bonus materials on this release as on the DVD version, all encoded in 480i resolution. The release will feature an Audio Commentary by director Edward Zwick as well as a selection of Deleted Scenes, including “The Beheading (Behind the Beheading)” and “Algren and Katsumoto.” Also included on the release is the History Channel Documentary “History vs. Hollywood” as well as the Featurette “Tom Cruise: A Warrior’s Journey.” In addition, look out for
Edward Zwick’s Director’s Video Journal with plenty of behind-the-scenes footage, narrated by Ed Zwick and Tom Cruise. A Production Design Featurette is also included as well as a featurette on the Costume Design. Imperial Army Basic Training is a look at the weapons of the Samurai. The release is rounded out by A Conversation with Edward Zwick, footage from the Movie Premiere in Japan and the film’s Trailer.

For a first batch this is not bad. Surely in the future releases will make more extensive use of high definition features, such as the use of Dolby TrueHD audio tracks and bonus materials that are also encoded in high definition. Until then, this will do just nicely.