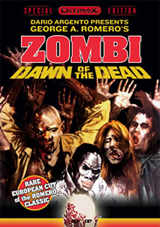 By now I have honestly lost count how many times Dawn Of The Dead has been released but we just got word from Anchor Bay Entertainment that the studio will release the European Cut of the movie in October.

“Zombi: Dawn Of The Dead” has been originally released as part of the award-winning, four-disc “Dawn Of The Dead: Ultimate Edition” DVD set last year and this upcoming release marks the first time the highly-sought after European Version will be available as a separate DVD.