By now, readers of this site are familiar with charismatic director Eli Roth and his quest to bring “Cabin Fever” to the big screen. But do you know his entire story? Didn’t think so. We caught up with Mr. Roth to unearth even more details about the auteur’s love for DVD, fighting rejection and why this country still needs a horror movie enema.

It took a long time for you to raise the money for Cabin Fever. At some point, during all of the rejection, you must have questioned whether or not it was going to happen. 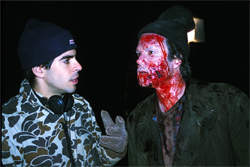 Never. All of the signs led me to believe that I was doing everything right. My student film was one of the student academy award winners and that made me say ‘Ok, I can do this.’ And what I soon realized after visiting a ton of production companies to back “Cabin Fever” is that the people who decide what horror movies get made have no idea what makes a good horror movie! Then you of course see the crap they are churning out. It’s just awful. Even the horror movies that were making money like “I Still Know What You Did Last Summer” didn’t quite get it right. Where’s the nudity? Where’s the gore? If you’re going to have teens in the woods having sex, they have to be naked. So these types of things motivated me. Rejection is part of the business. For me, rejection is never failure. Failure is giving up. That said, there are certain projects you let go or you grow beyond. Then, there are the projects that don’t let you sleep at night. “Cabin Fever” was one of those projects.

Will Cabin Fever’s profit margins prove to other producers that the movie-going public has a deep desire to see more of the red stuff?

Yes, and other directors have told me as much. “House of 1,000 Corpses” has a lot to do with this too. It’s a very bloody, dark, violent movie. Same with “28 Days Later.” Clearly, when people go to see a horror movie they want to be scared. Even if the executives don’t understand why people want that, they’re not afraid of it anymore. Before, there was a wave of movies like “The Ring”, “The Others” and “The Sixth Sense” which were all PG-13. That’s when everyone said R-rated horror is dead which is bullshit. If you make a good movie it doesn’t matter what it’s rated.

How big of an emphasis do you place on the musical score?

It’s everything. I had a spectacular, young composer named Nathan Barr do 72 minutes of music for “Cabin Fever.” It was a full, organic, orchestral score. He makes crazy noises with cellos and cymbals. He played around 50-60 different tracks all out of a studio in his house. I would love to retain the same folks responsible for the music in “Cabin Fever” and give them more money on a bigger project and really see what they can do.

Being that you’re such a gung-ho horror nut, I was expecting the “Cabin Fever” DVD to be, like, a five disc box set extravaganza. Why only one disc?

Most of the stuff we shot is in the movie, especially the gore. There is a longer cut and I would eventually like to do a director’s cut DVD. My feeling is this: Sure we could’ve done five discs but what are those five discs going to be made up of? Along those lines, there are five different commentaries on the “Cabin Fever” DVD. Are people going to listen to all five commentaries? No way. But there’s plenty of there to choose from depending on what you’re most interested in. The guys at Third Sector did an amazing, amazing, AMAZING job with the “Cabin Fever” DVD. They really care about making DVDs that make directors happy. When I sat down with them, I said I want to do this thing called “Chick Vision”, five commentaries, and an Easter Egg on the menu selection screen. There wasn’t anything they couldn’t handle. 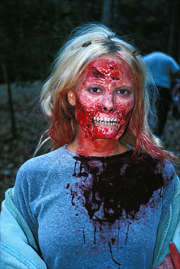 From The New York Times, to Peter Jackson they all love “Cabin Fever”. Does this validate what you now do for a living?

Without a doubt, I’ve enjoyed some really incredible reviews with some going so far as to say “Cabin Fever” is an AIDS metaphor. For me, the validation is seeing and hearing fan reaction, like ‘it was a great time’ or ‘I was so grossed out.’ People actually came up to me and said that “Cabin Fever” was the most fun they’d had since the 1980’s. But for Peter Jackson to provide that publicity, he’s never done that for another movie. He did it because Stephen King gave a quote to the “Evil Dead.” Then, when you hear that Quentin Tarantino said that “Cabin Fever” was one of his favorite independent films of the year, you start to think, ‘What planet am I on?’

Even though films like “Cabin Fever” are telling people that it is ok to have fun at the movies again, I still get weird looks from people when I tell them about how much I love movies like “Bad Taste” or “The Texas Chains Massacre.” What’s the deal?

We’re not conditioned to enjoy anything other than what is told to us. Anything that deviates from that, people don’t understand it and they aren’t open to new things the way they are in other cultures. There’s a certain mentality here. I also think that the biggest problem is the marketing. Because the MPAA won’t let you do certain things in a poster or trailer, you can’t really show these movies for what they are. You go to every other country in the world and you’ll soon notice that they celebrate genre films. They are treated like an art form. Brussels International Film Festival, Fantasia, Montreal, Stiges Festival in Spain, they’re all serious about their love for genre films. Stiges, for example, hailed “Beyond Re-Animator” as a work of genius. They love and embrace these movies. There is such fucking snobbery in this country against horror movies that if you say you’re making a horror movie; it’s like you’re saying that you’re making porn. Studios sent out press materials for the “Texas Chains Massacre” telling journalists to not refer to it as a horror film. It’s a big problem. You’re not allowed to call a horror movie a horror movie. Thrillers scare you while they’re happening, you find out the twist, it’s over, then it’s not scary anymore. Horror resonates. It gets into your psyche and disturbs you.  The best horror movies conjure images that stick with you for years. That’s horror.