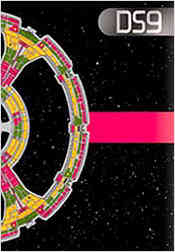 Star Trek fans (myself included) are in Trek DVD
Nirvana right about now with two more seasons of TNG
and special editions of the remaining films on the
way. But Paramount Home Entertainment just made
the honey pot that much sweeter with the anticipated
announcement of Star Trek Deep Space Nine: The
Complete First Season.

Loved by some, hated by others. Deep Space Nine was
the darkest and by far the most involving of all Trek
series, taking the action away from a starship
visiting a new planet each week and seating it firmly
in one place allowing the characters and situations to
grow over time. The first season was a shortened one
premiering the week of January 4th 1993. With only 20
episodes the series struggled against the well
established sixth season of Star Trek: The Next
Generation, but began the story-arc that would last
for seven years. After seventy years of Cardassian
occupation, the planet Bajor calls upon the Federation
to offer them aid and future membership. Benjamin
Sisko, a widower after the horrible battle of Wolf
359, takes command of a battered Cardassian mining
station orbiting the planet – a job he doesn’t want.
But the discovery of the first stable wormhole and a
cryptic brush with Bajor’s religious leaders convinces
Sisko to stay the mission and make the best of life
aboard Deep Space Nine.

Deep Space Nine finally comes to DVD on February 25th,
2003. If TNG is any indication, we will see the rest
of the series and the Dominion War unfold throughout
the year.