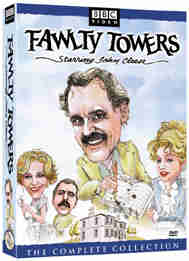 This September, Warner Home Video will further their relationship with the BBC when it releases John Cleese’s popular British comedy Fawlty Towers on DVD in the autumn.

Inspired by a hotel John Cleese once stayed in when he was filming “Monty Python.” “Fawlty Towers” is the story of a frantically inept hotel owner who is drastically unqualified for his job. His acerbic attitude is only outdone by the verbal assaults rendered him by his wife Sybil. Their attempt to keep the hotel running rarely ends well.