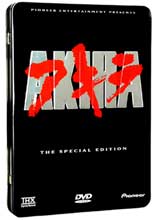 Several details have come in regarding Pioneer Home Entertainment’s upcoming release of the Japanese animated adventure Akira which will be hitting stores this summer.

Set in a futuristic Japan, the cult-classic “Akira” follows Kaneda, the leader of a bike gang whose close friend Tetsuo gets involved in a government secret project known only as Akira. On his way to save Tetsuo, Kaneda runs into a group of anti-government activist, greedy politicians, irresponsible scientists and a powerful military leader. The confrontation sparks off Tetsuo’s supernatural power leading to violent struggles, a coup attempt and the final battle in Tokyo Olympiad where Akira’s secrets were buried over 30 years ago.

Two versions of “Akira” will be made available, a regular edition and a special 2-disc edition. Both will contain a remastered Dolby Digital 5.1 English soundtrack and the original Dolby Surround Japanese audio with optional English subtitles. The regular edition will be fairly featureless. The two-disk Collector’s Edition, however includes two documentaries, one on the making of the film, and one on the creation of the soundtrack, a featurette on the restoration of the film, and other surprises, which are yet to be revealed. A limited run of 75,000 of the Collector’s Edition will be released in a collectable tin. After they are gone, Pioneer will repackage the set in traditional packaging.

Both versions are tentatively scheduled for a July 24th release.