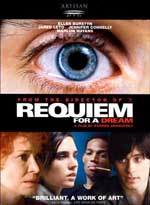 Artisan Home Entertainment is getting ready for a March DVD release of one of the year’s most devestating films: Requiem For A Dream.

Directed by Dareen Aronofsky, who created the wonderful ‘Pi’, ‘Requiem For A Dream’ is a powerful look at drug abuse that met with high critical and audience acclaim.

The disc will come with an anamorphic widescreen transfer in the film’s original aspect ratio of 1.85:1, and Dolby Digital 5.1 Surround audio. Extras include an audio commentary with director Aronofsky, two ‘making of’ featurettes, interviews, deleted scenes, cast filmographies, production notes, TV spots, and the theatrical trailer.

‘Requiem For A Dream’ is a movie that demands to be seen. The disc is scheduled for release on March 20th for the suggested retail price of $24.98.