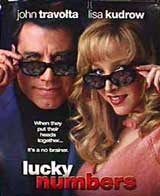 Paramount Pictures Home Entertainment is readying the release of the DVD of Lucky Numbers (Special Edition) (2000) this March. Hopefully, the home version will do a bit better, as the movie didn’t fare too well (to put it kindly) when released to theaters.

The plot has potential: to get himself out of debt, a popular weatherman decides to rig the state lottery. But before he can collect his millions, he’ll need a little help and ‘a whole lotto luck’. (I certainly hope the actual script is better than that line…)

‘Lucky Numbers (Special Edition)’ will be released on March 20th. The suggested retail price is $29.99.