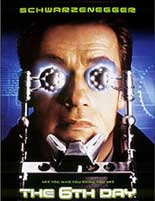 A big, well-muscled man with an accent, whose identity has been stolen in the future…sound familiar? It’s just another day in the life of Arnold Schwarzenegger. And now you too can relive someone else’s life when Columbia TriStar Home Video releases the DVD of The 6th Day this March.

This Arnold vehicle has the big guy discovering that he has been cloned for nefarious purposes, and now he must discover the truth about the world around him and, ultimately, about himself.