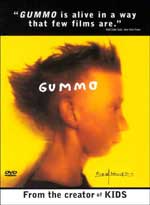 Fans of the bizarre and cutting edge will be glad to hear that New Line Home Video will soon release two of their Fine Line titles from director Harmony Korine: Gummo (1997) and Julien Donkey-Boy (1999)

Gummo is a portrait of small-town Middle American life that is both ‘bracingly realistic’ and ‘hauntingly dreamlike’. Eschewing traditional narrative, the film has been called startling, hilarious, strange, tender and poetic. A true cult film, playing midnight showings in several cities, it has both ardent followers and detractors; always a sign of something interesting and challenging.

The disc will come with an anamorphic widescreen transfer. Extras include a photo gallery with an audio commentary by the director, cast and crew filmographies, and an animated photo gallery.

Julien Donkey-Boy is a journey into the mind of an adolescent schizophrenic. As the film progresses, Julien’s internal struggle increases in intensity until the film’s shocking and ‘bizarrely transcendent’ conclusion.

Both discs are scheduled for release on March 20th with a suggested retail price of $24.98.