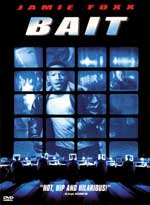 High speed chases, hi-tech gadgetry, and high-speed quips. It’s all in a day with Jamie Foxx in the new comedy Bait, coming to DVD from Warner Home Video this January.

In this fast-moving movie, the hip and popular star of ‘The Jamie Foxx Show’ and ‘Any Given Sunday’ hits the mark as an unsuccessful small-time crook who becomes the unsuspecting ‘bait’ in the Fed’s attempt to catch a murderous high-tech thief.

The disc will contain an anamorphic widescreen transfer of the film, letterboxed at 2.35:1. Audio is Dolby Digital 5.1 Surround. Subtitles are available in English and French. Bonus features include an audio commentary with Jamie Foxx, a filmography, the film’s trailer, and yet another section of ‘Film Highlights’, which is a feature we have yet to figure out a good use for.