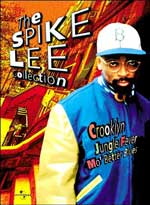 It seems that Spike Lee is becoming well represented on DVD lately, with many of his films seeing new release, re-issue, and special editions. Now Universal Home Video is putting together a nice package of three of the director’s films, and to sweeten the pot, one is a new release.

Both ‘Crooklyn’, and ‘Jungle Fever’ are the previously released discs, featuring anamorphic widescreen transfers of each film, with ‘Crooklyn’ sporting a Dolby Digital 5.1 Surround track, while ‘Jungle Fever’ has a Dolby 2-channel Surround track. Each has similar extras that include production notes, cast/crew bios, theatrical trailer, and once again, the ever-so-helpful feature of film highlights.

“Mo’ Better Blues” is the story of Bleek (Denzel Washington), a young boy forced to spend much of his youth learning to play his trumpet. Bleek grows into adulthood and forms his own band – The Bleek Gilliam Quartet. The movie deals with his relationships with women and other members of the band throughout many years, as he finds that life always comes full circle.

“Mo” Better Blues“ will also be released as a single disc separate from the collection.