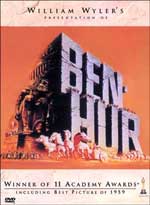 One of the biggest movies of all time, in every sense of the word, will finally make its long-awaited appearance on DVD when Warner Home Video releases Ben-Hur (1959) this March.

Winner of 11 Academy Awards, Ben-Hur is the story of a Jewish nobleman who is enslaved but survives to triumph over his Roman tormentors in one of the greatest scenes ever filmed: the incredible chariot race.

Warners has created a new digital transfer for this epic film, giving it to us in anamorphic widescreen, letterboxed at 2.76:1. Audio is a newly mixed Dolby Digital 5.1 Surround soundtrack, with a French 5.1 track available as well. Subtitles are available in English, French, Portuguese, and Spanish. Bonus features include additional footage and behind-the-scenes footage, an audio commentary with Charlton Heston, screen tests, the documentary ‘Ben-Hur: The Making Of An Epic’, cast highlights, and the film’s theatrical trailer.

‘Ben-Hur’ is scheduled for release on March 13th, with a suggested retail price of $24.98.