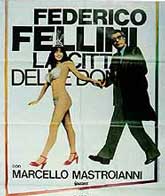 Though still a young medium, the growth of DVD has insured that with each passing year, more and more great directors and their work are being represented on disc. And of course, the more great work available, the more people are interested. Everyone wins. So I’m happy to report that another of the great Federico Fellini’s films is making its way to disk this January. New Yorker Video is preparing to release the Maestro’s City of Women (Città delle donne, La) (1980).

As with most of his films, the plot is secondary to character and flavor. In ‘City of Women’, a businessman finds himself in a fantastic amusement park surrounded by and threatened by women en masse in what has been called ‘Fellini’s late period masterpiece.’

The disc will include the original Italian soundtrack in Dolby Digital Mono, with English subtitles. No word yet on the picture transfer (it should at least be widescreen, given that the film was shot at 2.35:1!). Extras include production stills, Fellini & Mastroianni’s bios, a filmography, and the Italian & American trailers.

‘City of Women’ is scheduled for release on January 23rd, with a suggested retail price of $29.95.