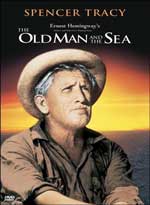 If you’ve been checking our Release Section here at DVDReview, then you’ve probably noticed the enormous wave of older classic films making their way to our beloved medium of late. Well, continuing this recent and wonderful trend, Warner Home Video is getting ready to release The Old Man And The Sea (1958) to DVD this coming March.

The disc will feature both an anamorphic widescreen transfer of the film along with a pan and scan version. Audio is a Dolby Digital Mono soundtrack. Bonus features will include documentaries, the film’s theatrical trailer, interactive games, and, for those who want to own the disc but not watch the entire movie, film highlights.

‘The Old Man And The Sea’ will be released on March 13th with a suggested retail price of $19.98.