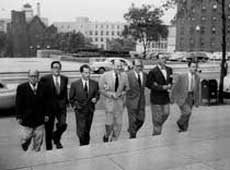 Ring Lardner Jr., the last surviving member of the Hollywood Ten, a group of screenwriters who were jailed and blacklisted during the McCarthy era in the 1950s, has died at 85. Lardner, whose father was a humorist and baseball writer, died of cancer Tuesday at his home in New York City.

Lardner’s satirical screenplays earned him two Academy Awards, but he was best known for his refusal to tell the House Un-American Activities Committee if he had ever been a Communist. Lardner was a Communist but held that his political views were none of the government’s business. ‘I could answer the question exactly the way you want,’ he said under questioning in 1947. ‘But if I did, I would hate myself in the morning.’

Lardner, with Michael Kanin, won an Oscar for best original screenplay in 1942 for Woman of the Year, starring Katharine Hepburn and Spencer Tracy.
From 1947 to the 1960s, Lardner had a hard time finding work because he was blacklisted along with the other members of the Hollywood Ten, who included Alvert Maltz, Dalton Trumbo, Samuel Ornitz, John Howard Lawson, Herbert Biberman, Robert Adrian Scott, Lester Cole, Alvah Bessie and Edward Dmytryk. Of the 10, only Dmytryk finally named names.

Lardner served about nine months in prison in the 1950s, and then worked in Mexico, New York and London writing TV series. He used various pen names to conceal his identity.

Some of the screenplays he worked on during this period included Virgin Island (1959), The Cardinal (1963), starring Charlton Heston, and the ironically titled A Breath of Scandal (1960). With 1965’s The Cincinnati Kid he resumed receiving screen credit, and in 1970 he took home his second Oscar for his adaptation of the bestseller M*A*S*H. The movie became one of director Robert Altman’s biggest hits and formed the basis of a television series.

In August, the Writers Guild of America corrected the credits of eight blacklisted writers on 14 1950s and 1960s films, crediting Lardner and Hugo Butler for The Big Night, a 1951 film noir starring John Drew Barrymore.

Lardner’s autobiography, I’d Hate Myself in the Morning, came back from the printers just days ago and should be in stores before the end of the year, according to his son James. He is survived by his wife, Frances Chaney, two sons, a daughter, a stepson and a stepdaughter.