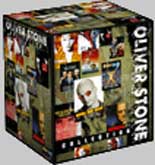 Warner Home Video salutes the acclaim, genius and controversy of Oliver Stone with the arrival of the Oliver Stone Collection on DVD this January.
This tribute to the multiple Academy-Award winning director includes enhanced versions of many of his most popular and acclaimed films and an all-new, never-before-seen career retrospective, Oliver Stone’s America, featured on a separate disc in every gift pack.

Individual titles in the ‘Oliver Stone Collection’ will be available for purchase (excluding the new ‘Any Given Sunday Special Edition Director’s Cut’ DVD), and most of the ‘Collection’s’ DVD titles include new, special added features such as commentaries, rare documentaries, outtakes and extended scenes.

The four Warner titles in the collection, ‘Any Given Sunday,’ ‘JFK,’ ‘Natural Born Killers’ and ‘Heaven and Earth,’ will include new digital transfers and original theatrical trailers.

The ‘Any Given Sunday’ double-disc DVD can be found only in the ‘Oliver Stone Collection’ and includes added features such as two full-length commentaries and more than 12 deleted/extended scenes in addition to those features found on the single DVD now available.

The 2 Giftsets are packaged as follows:

Both of these packages are scheduled for release on January 16.